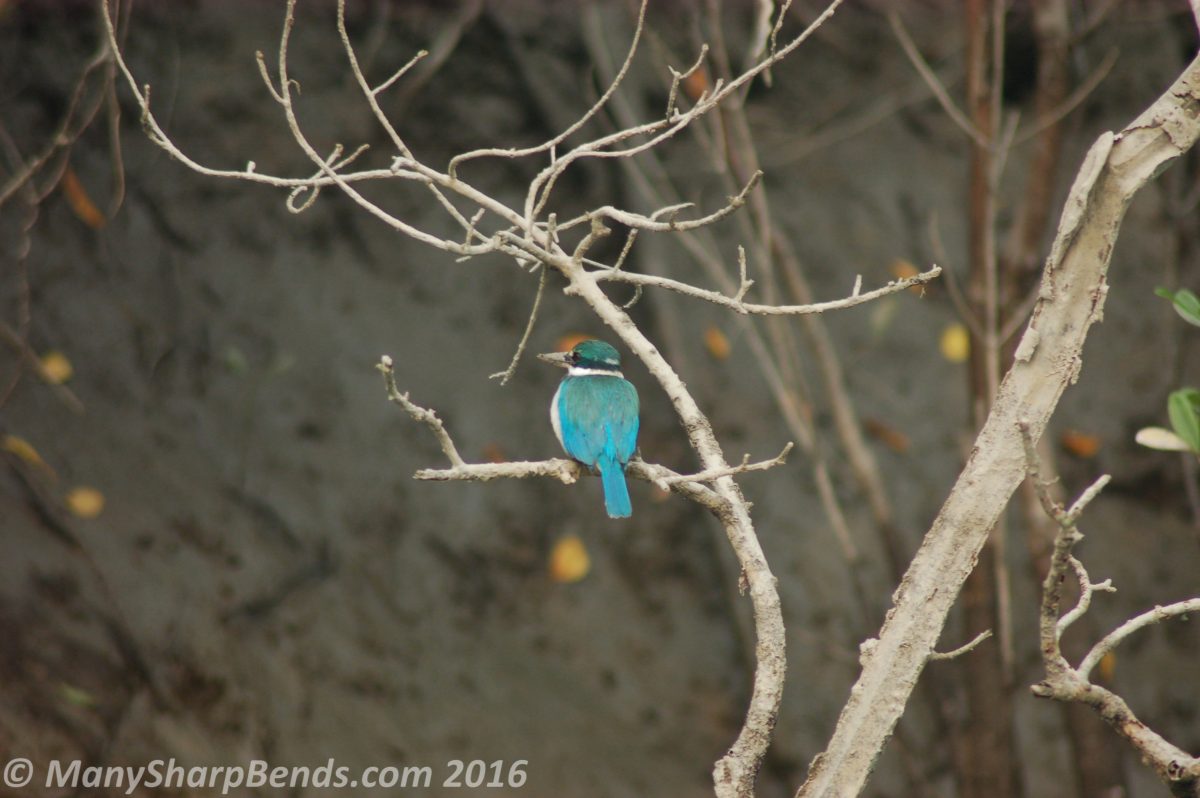 While in the mangroves of the Everglades National Park in April and our guide asked if anybody knew the world’s largest mangrove forest, we smiled as we not only knew it but it was also on our world trip itinerary! And here we were, 20th December, setting out for Sundarbans from Muzaffarpur after a restful 2 week break at Manish’s parental home. December 2016 saw an unexpectedly early start to the severe cold and foggy weather that is expected in these parts from Christmas onwards, with some respite just as we were leaving. A 2+ hour road journey to the Bihar’s capital city Patna and then we were on a flight to Kolkata where we were to stay overnight before next day’s journey by car & boat to the mangroves. This flight turned out to be a milestone – our 50th since we began travelling about 37 weeks ago!

A Facebook update on our destination had prompted a friend to query if I had read the acclaimed award-winning novel “The Hungry Tide” by Amitav Ghosh. So that was added to our reading list and Kindle version promptly bought and is being read at the time of writing this.

It was a long road journey from Kolkata to the town of Sonakhali, from where it would be a boat journey to the Sundarbans. This was the first instance of us taking a “package tour” in our world trip and we had felt a bit of pain in getting the details completely clear through email with our tour organiser. We understood why on meeting him just before we reached Sonakhali. With an old feature phone in hand, our tour organiser was running a single man operation on the road! Around noon we boarded our boat that would be our day-time abode for the next 3 days.

We could immediately see all the similarities between the approach to the boat boarding point here and in Nauta in Peru where we had boarded for our Amazon exploration. Un-maintained approaches with a fair amount of garbage around (though the boats themselves are very particular about not dumping any) and apparent lack of safety measures were all reflective of an administration that is at best apathetic to nurturing the environment and promoting eco-friendly tourism.

Happy to be able to stretch our feet and choose where we want to sit (we had booked a private tour which meant we had the boat to ourselves), we set our eagerly down the Matla river with three staff on board – the boatman, his assistant and a cook. The kitchen on the boat was a novelty for us with all meals, snacks and tea/coffee prepared in it for the entire duration of our trip. And the lunch spread was quite remarkable; we could hardly believe it was all done by a single person in a tiny kitchen. Also a novelty was the toilet – a neat little space at the end of the boat, open to the sky and the river!

We passed by a number of villages and finally Godkhali, the last point reachable by road. Across from it is the island called Gosaba at the confluence of two major rivers and we learnt it is the last of the inhabited islands before the Sundarbans National Park. It was a bustling stretch with boats plying between Godkhali and Gosaba ferrying people and goods.

Soon after we could see a board welcoming us into the Tiger Reserve, the only one in a mangrove forest. Our boatman pointed out a little “temple” on the small island with this board and told us it was where widows came to pay respect to “Bonbibi”, the goddess of the forest. He then pointed out little pieces of red cloth tied around trees and said these marked spots where families paid homage to their kin who had been taken prey by tigers. The tigers in Sundarban are often referred to as man-eaters. While this may not be appropriate for the entire tiger population here, it is more commonplace than elsewhere. Most people fall prey when their boats are close to the forest and not while on land we believe. Humans here use the waterways to venture deep into the tiger’s habitat in quest of fish, crabs & honey and would appear as prey in their crouched position on their boats.

We saw fencing coming up and learnt these were put in by the Forest Department as a barrier to prevent the tigers swimming out to villages across from here. We wondered how a tiger could possibly swim across the river so wide. The boatman told us the tigers here are extremely strong swimmers and do indeed make the journey across! That’s an excellent example of natural evolution and habitat adaptation!

We soon reached Sajnekhali, the entry point into the national park just around sunset and after a brief stop for the boatman to get permission we carried on to our resort for the night.

The Sundarban Residency is a relatively new place and so not a familiar place for the boatman who had to ask after a while trying to get there based on where he thought it was. We finally landed on an unmarked ghat and a few minutes walk brought us to our nightly abode for 2 nights.

Any expectations we may have had of a warm welcome here, having seen a tourism ministry ad featuring Shah Rukh Khan, were quickly dashed. Manish’s Bengali language skills (learnt as a child in school) were put to the test with the receptionist who was completely disinterested in us and kept repeating the room charge to be paid despite telling him it was paid for. And neither Hindi nor English was within comprehension for him. Turned out his ‘manager’ in Kolkata had overlooked informing him. Fortunately the room was comfortable and grateful for the hot water, we showered and rested before a delicious dinner cooked by our cook on the boat and served at the ‘resort’. Which itself we found quite pleasant the next morning as we sipped our morning tea brought to us in a flask by our boatman.

We started out for our full day out to explore the waterways, stoping first to pick up our guide and then for an orientation at the visitor centre after a delicious breakfast of luchi-aloo onboard. We saw the endangered River Terrapin, a type of turtle, in an enclosure here as also a crocodile in another. And some good information on the plant, bird and animal life of Sundarban along with a brief on the local people & traditions.

Our guide was a great guy, a local self-taught person who is passionate about his work and working with little support, if any from the authorities. We learnt that the name of the region comes from the Sundari trees that are commonly found in the forests here and about the twice-a-day low & high tide cycle that shapes the land. Egrets and herons were the first wild inhabitants, besides the macaques at the Sajnekhali ghat, we spotted. We learnt from our guide how to distinguish between the little, intermediate and great egrets. Suddenly our guide was asking our boatman & his assistant to lower their voices – he had spotted a crocodile sunning itself on the bank and asked us to look through our binoculars. We were lucky that the Croc just stayed there despite increasing noise from another boat and was there even after we passed by.

Spotting a bag being tossed out of another boat, our guide asked our boatman to go close by and reprimanded the boatman of the offending boat & made him retrieve the trash. He explained to us that the guides help the rangers in this manner and will also report any trespassers or unauthorised activity.

It was low tide which meant better chances at spotting animals and birds. The most spotted of all through the course of the morning were Black-capped Kingfishers. Flocks of Whistling Ducks taking off from the mud banks, flying across to settle on the opposite side was a beautiful sight to see. We saw some wild boars foraging and not too far off the bright blue of a Collared Kingfisher caught the experienced eye of our guide.

Lots of footprints were visible on the banks and we learnt that most were of deer that would have come to drink water. He could make out just by the pattern from a distance. And then he spotted tover pug marks! Our hopes went up, maybe we would get a glimpse of a Royal Bengal Tiger! We hovered around, looked really hard into the woods but after a while had to move on 🙁

We turned our attention to the beautiful trees – the distinct bands of shades we learnt are the result of the tide; the salt deposited by the water at high tide makes the lower set of leaves quite dull. The term “low-tide country” is so apt.

We anchored for lunch and then went on to visitor stop point with a watch tower. Besides a crocodile and a bunch of macaques we didn’t see any wildlife.

On the way back towards Sajnekhali we discussed the local situation with our guide. Corruption was a major problem at all levels and none of the local leaders had any interest in developing the area for tourism that could provide opportunities for so many. Younger folks hence preferred to go to the cities. The staff at resorts and guides were local folks with no training whatsoever on how to interact with tourists from outside the state of West Bengal. Now we could put our experience at Sundarban Residency into context. It made us wonder why somebody in the tourism ministry here thought it was a great idea to shell out a fortune to SRK to attract tourists without investing in what is really needed to promote tourism. And why do super rich superstars endorse something blindly just for some more money?

Our “package” was for 1.5 days of forest but our boatman seemed to have the impression that we were done after the full day! Luckily the guide was quick to understand the situation & figured that if we got our permit for next day now, we could head straight out into the waterways the next morning instead of coming to Sajnekhali thus saving over an hour’s time and addressing the boatman’s concern of getting back in time. Thanks to our guide’s initiative, we were able to get a good few hours in the mangroves the next morning. And it was worth it for we got to see the Brown-winged Kingfisher, the largest of all kingfishers we have seen, and some Lesser Adjutant Storks nesting on tree tops.

And then it was time to head back. It was a mixed feeling, we had seen some beautiful birds and mangroves, no tigers but the whole experience was somehow falling short of this being such a unique place. Majority of the visitors seem to be picnickers, from Kolkata or nearby, often noisy and clearly unaware of the respect and serenity the place deserves. Those responsible for preserving and promoting this unique ecosystem probably are equally clueless or just can’t be bothered.

We were glad we got a good guide who helped us understand and appreciate the place. Before leaving he showed us Pied Kingfishers to complete the five types he had said we should be able to see.

And with that it was back to Kolkata and onward the next morning to Imphal for Manish’s school batch reunion after 30 years.

Next big stop is Thailand. See you there!