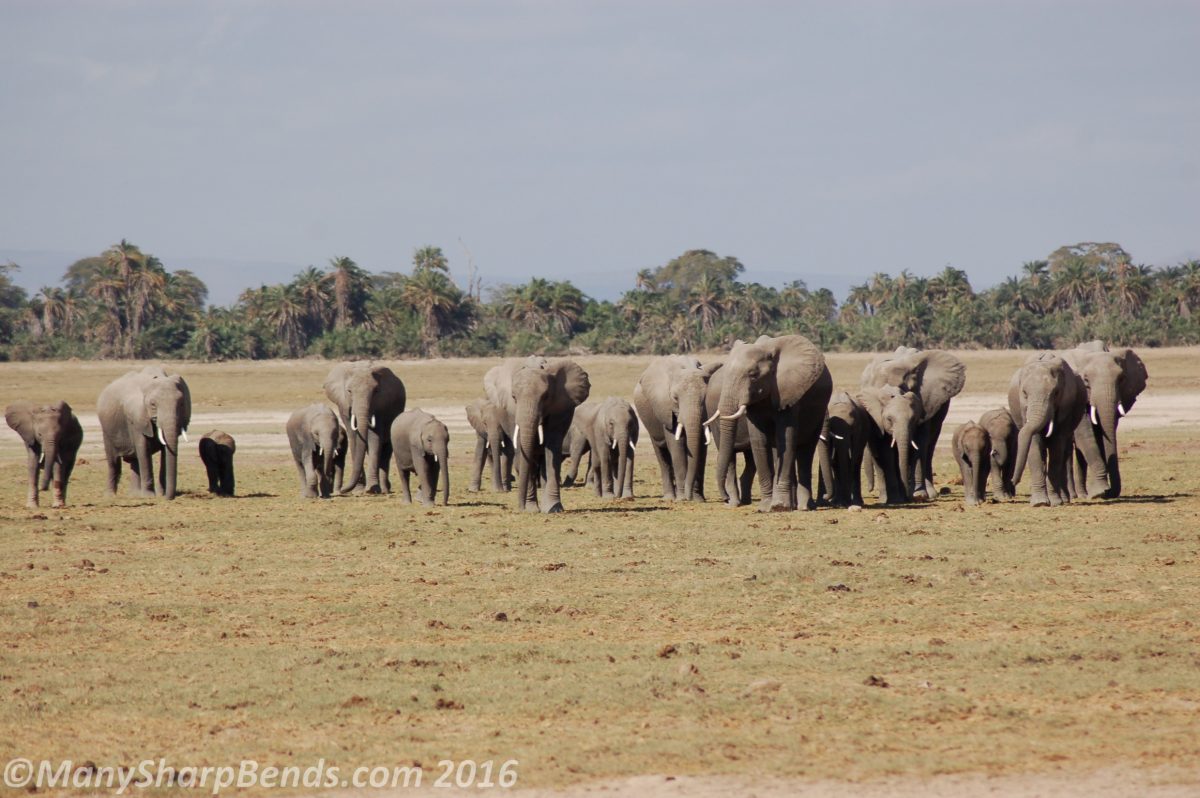 7th Oct 2016 heralded a pleasant Friday morning in Nairobi. We were eager to get to the third and last of the parks on our Kenyan itinerary – the Amboseli National Park in southern Kenya. But first agenda for the day was a brief visit to the Nairobi National Museum where we got a basic understanding and perspective on Kenya’s history. At 53 years, Kenya is a young nation that has gone through its struggles to see itself as one nation instead of the distinct regional tribes it had been for centuries before its colonisation.

After a (not so) brief stop at the Big Time Safaris office in the CBD, we left Nairobi heading out on Mombasa Road. It was a busy but comfortable highway. 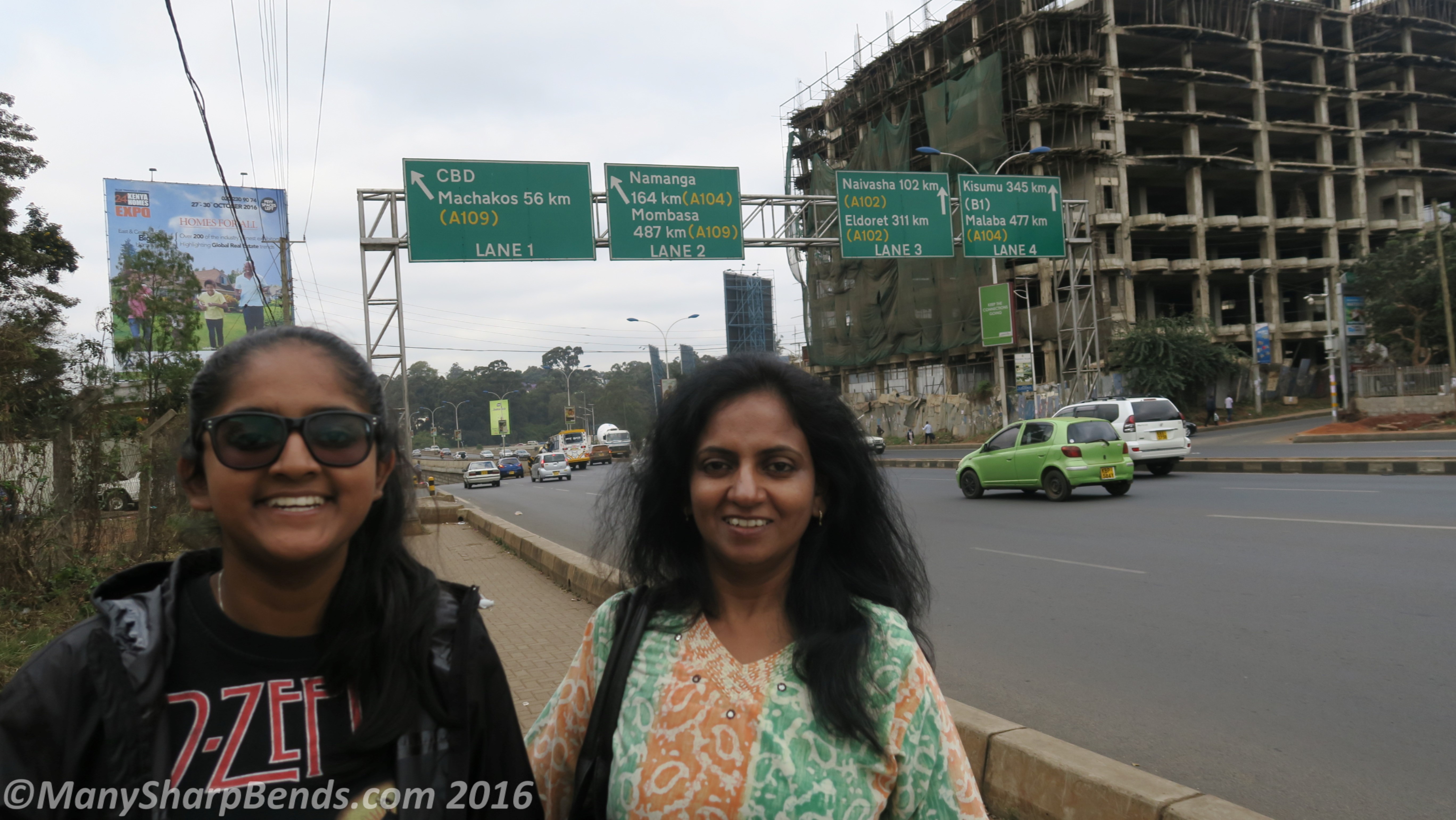 It was a four-hour journey with the last stretch seeming like an eternity of rattling bones!! And the landscape had changed completely to a dry scrubby one, it was perceptibly hotter and we could see little sand/dust “tornadoes” blowing every now & then (looking it up later, came to know they are termed “dust devils“). The name Amboseli originates from the word “Empusel” in the Maa language (of the Maasai) meaning “salty, dusty place”. One could only wonder how this environment could be the habitat of Africa’s big 5. All doubts were put to rest and the bone-rattling made worthwhile by some fascinating sights and all these still over 20 km outside the park. The first was a gerenuk, also known as giraffe gazelle, a species categorised as NT (near threatened) by IUCN (International Union for Conservation of Nature). Not having seen any of these beautiful creatures in Maasai Mara, we were delighted to see one from so close!

We reached the Amboseli Sopa Lodge just after 3 pm and gratefully rested our spines on the restaurant chairs while being lavished with attention over our lunch, it was signature Sopa hospitality. We were delighted with our room, constructed with locally sourced material and in traditional style, it was spacious and pleasant. No question of an air-conditioner, no fans either, but it was perfectly comfortable indoors. We deposited our luggage in the room and headed out for a short evening safari.

As we left the lodge, our guide Richard pointed in the westerly direction and said that is where Mt. Kilimanjaro is and if we are lucky we could see it one of the days! All we could see then was a haze and clouds with the outline of a hill extending ahead. A 40-minute ride, all dusty and most of it bone-rattling, took us to the Kimana Gate of the park. The Kenya Wildlife Service has branded Amboseli National Park as “Kilimanjaro’s Royal Court”. The highest peak of Africa is more than a backdrop to the entire park, it is the secret behind the vibrant natural life in this semi-arid region that only receives an annual rainfall of 350 mm. Water from the Kilimanjaro that seeps down through porous volcanic rocks springs up in Amboseli and feeds the swamps that sustain the entire ecosystem here.

The sun was near setting as we drove in. We spotted a few elephants in the distance, herds of grazing zebra and quite a few vultures on tree tops. And then as we neared another vehicle that had stopped ahead, Richard said we should be able to see cheetahs lying on the ground to the left. And yes, there they were, three of them with just their heads visible. Looked like they were done for the day, but luckily for us they started up and strolled on for a bit giving us a great view of their athletic forms!

We decided to head back and leave the viewing of big elephant herds for the next morning when we would all be a lot more energetic.

The next morning dawned with a clear view of Mt. Kilimanjaro, lady luck was smiling on us! We were not the only ones to be thrilled, all the staff in the lodge were too. They have had guests who have left without ever getting a view of the mighty peak.

Attributing our luck to Richard, we set out for the day in search of the herds of gentle giants that are synonymous with Amboseli. We saw so much more! Including lilac-breasted rollers and saddle-billed storks that we had expected to see but had been unable to spot in our visit to the Lake Nakuru National Park.

Richard informed us that we were making our way towards the marsh / swamp around which all the animals gather in the morning. Soon enough the scenery changed and it was like a school with multiple playgrounds and all students out on them! Elephants, buffaloes, hippos, wildebeest, zebras, gazelles, warthogs and a stunning array of birds to feast our eyes upon. A lesser known fact about Amboseli is that it plays host to around 400 species of birds.

As we watched the flamingos which were at some distance, there was a sudden restlessness amongst the birds nearer to us with a whole lot of egrets and ibises taking flight. The cause – an African Fish Eagle that was flying. The beautiful bird of prey perched upon a rock on the roadside presenting the perfect photo opportunity! And then it took flight again causing a flutter all around before settling on the next rock. This little “show” continued a couple of times giving us plenty of good views.

We drove on enjoying the visual bounties the swamp had to offer, just as the residents here were doing with its edible bounties 🙂

We watched this baby elephant that stayed on the side and the rest of its herd which were quite close to our only stop during the safari, at the base of Observation Hill. It is the only place in the park where people are permitted to step out of their safari vehicles and walk to the lookout point at the top. On the way up we saw plenty of superb starlings and weaver birds. The lookout point gave us panoramic views of the swamps and animal herds all across.

Back from Observation Hill, we continued around the swamp heading back to the Kimana gate to get back for lunch.

After lunch and siesta we met up with Sammy, the resident Maasai at our lodge and learnt some interesting facts. The Maasai of the Amboseli region are way more traditional than the folks in the Mara region Sammy informed us. That was also evident to us on observing the attire and jewellery of the people we had seen in and around the area. Sammy told us about the transformation of his clan from being lion hunters to wildlife guardians, thanks to the efforts of Kenya Wildlife Service and the tourism industry. He showed us the spear he had used as a youth, now on display at the lodge and seen on the pillar behind us in the below photograph. He told us lion hunting was done both as a rite of passage into adulthood and for protection of livestock, the source of living for the Maasai people. No more killing now, he said decisively. He is happy that he now has a job and his kids go to school as do other kids in the nearby villages. They dream of becoming engineers, doctors, pilots and maybe even President!

Sammy was curious to know about mountains, forests and animals in India. He told us that the Indians in Kenya are very good business folks and that the lodge we were in and most of the leading ones in the area were owned by Indians. For someone who hadn’t been to school, Sammy knew and spoke English quite clearly. We were completely in awe of his appearance and it was sealed with firm handshakes!

That night’s dinner was arranged outdoors by the staff with live folk entertainment by a group of Maasai women. It was a wonderful atmosphere with their rhythmic, lyrical renderings bringing the night alive under the stars. We could only wonder at the inborn musical talent in these folks whose only training was by the ear from generation to generation. What a rich heritage! Reminded us of the tribal and folk music and dances from back home that we have had the good fortune of experiencing, but sadly most of our kids growing up in cities have no connection with.

Refreshed and rejuvenated after a sound sleep, we woke up to a clear view of the Kilimanjaro again! Everybody agreed that we were indeed very fortunate. After breakfast set off bag and baggage for our last safari with the plan to head directly to Nairobi, making our exit out of the park through Meshanani gate. This served the double purpose of covering a different part of the park and getting us faster to Nairobi. We had great sightings of elephant herds, flamingos flying in formations and quite unbelievably a lion sitting in the open grass near a carcass. The lion sighting was indeed special because they are very few in Amboseli, the number stated at Observation Hill being a meagre 35, their population having been decimated by years of human-animal conflict in this tough terrain.

It was when we stopped to watch, wondering at this rather small family of 3 elephants that we spotted the only lion we saw in the park. In the distance a herd of elephants was emerging. So we waited and much to our delight the threesome were heading towards this large herd. Soon after we saw the leader of the herd next to the adult and they seemed to be having a little chat! The other two meanwhile mingled with the rest of the herd. So we thought it was a little family tiff, now all sorted out! This was a big herd, we counted 26 members.

Ahead we had a great aerial display awaiting us – as we watched a large group of flamingos (called flamboyance!) in a stretch of pink, they suddenly took flight. There were hundreds in the air who started flying in various formations for a long time. We identified the shape of a whale repeatedly, it was mesmerising!

Thrilled and most satisfied, we bid goodbye to Amboseli and firmed up our intention to visit this part of the world again to appreciate the beauty and diversity, possibly next time across the border in Tanzania.

Next destination for us is Rajasthan with a brief stopover at the bustling Mumbai. Thanks for reading and see you in Rangeelo Rajasthan!

1 thought on “Amboseli: Where the Elephants Amble”