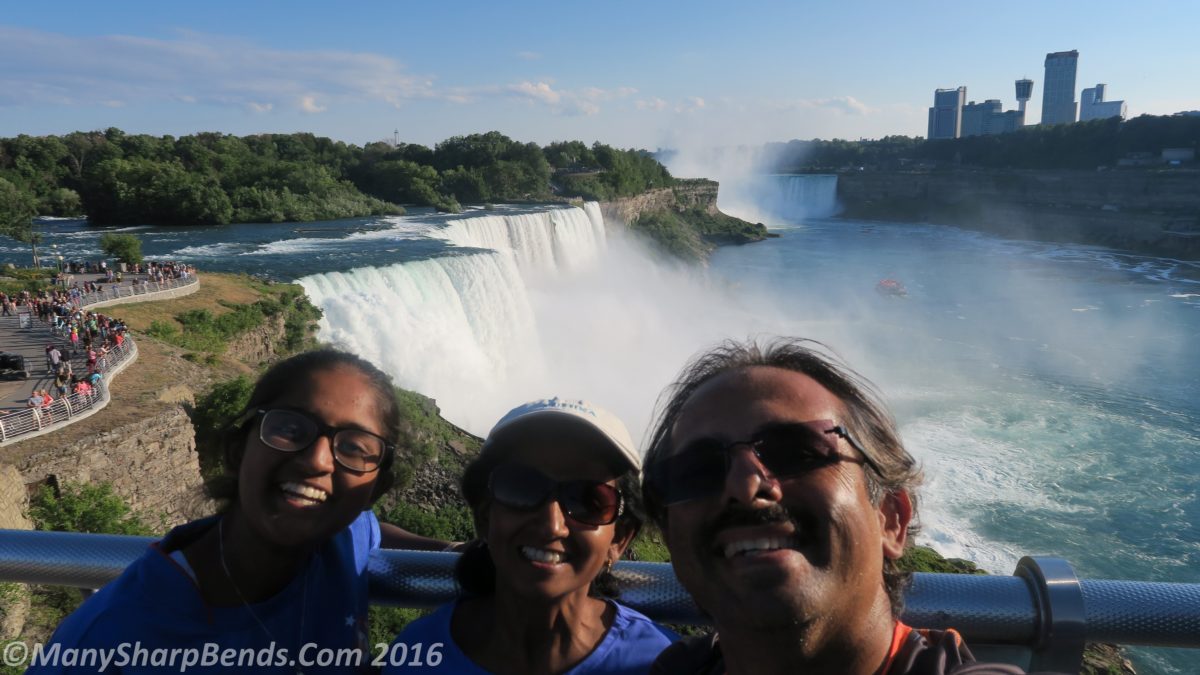 As our United flight landed in Buffalo at 1400 hours and the Best Western Van rolled in to pick us up, I glanced at my watch and reminded the family that this was the tightest project we had undertaken on this world trip. “No worries master planner, we are in safe hands”, quipped Meha; inflating my ego a thousand times. We had one hour to drop our bags at the hotel, grab a bite, pick up the rental car, drive to Niagara Falls an hour away, do multiple day time activities, see the falls during the lights too, and return. Then get up next morning for a day trip to Rock N Roll Museum at Cleveland. PHEW !

Hertz rental was kind enough to pick us up at the hotel. Paper work quickly done and we were upgraded to the next car category – I immediately wished we had been upgraded for our longer trips – this was only 1 day ! Never mind, we were on our way and reached Niagara by 6 pm, with plenty of day light still left. Prior planning had revealed that a nearby Casino would be a good FREE parking spot (ssshh!). All went to plan and a short walk later the first gorgeous views of the falls emerged.

If you ask an Indian tourist about their USA bucket list, Niagara falls would emerge on the top. Huge number of Indians at the falls was a testimonial to this fact, and we gleefully joined them in the pilgrimage !

Maid of the Mist is a popular boat tour which takes you near the falls in style. The last departure was approaching and we quickly got our tickets along with the blue rain ponchos.

We were on the way and lady luck emerged presenting a beautiful rainbow over the American Falls and were already drenched !

Past the American and Bridal Veil falls, we are now approaching the biggest of the 3 falls – the Horseshoe falls on the Canadian side. It was a breathtaking sight.

Pumped up by our first successful Niagara adventure, we made our way to our second and last adventure called Cave of the Winds, which is more exciting than Maid of the Mist.

Cave Of The Winds, a walk close to the Bridal Veil falls, is the ONLY (official) way to get VERY VERY close to the falls and stay as long as you want. We quickly signed up and donned our yellow ponchos and water shoes (included in the price).

Here is how you feel during the walk. You are soaked to the bone but boy it is fun !

I am deeply satisfied the project is going to schedule. We are done with day time activities and it’s already 9 pm. Niagara Falls under lights is a sight to behold – arguably more beautiful than day time.

So good old McDonald’s came to our rescue at 11 pm. Hundreds of unnecessary calories later, we are satisfied and hit the sack. Tomorrow is a big Cleveland day – Republican convention coinciding with Rock N Roll Hall of fame ! See you soon in the next Rock N Roll blog. 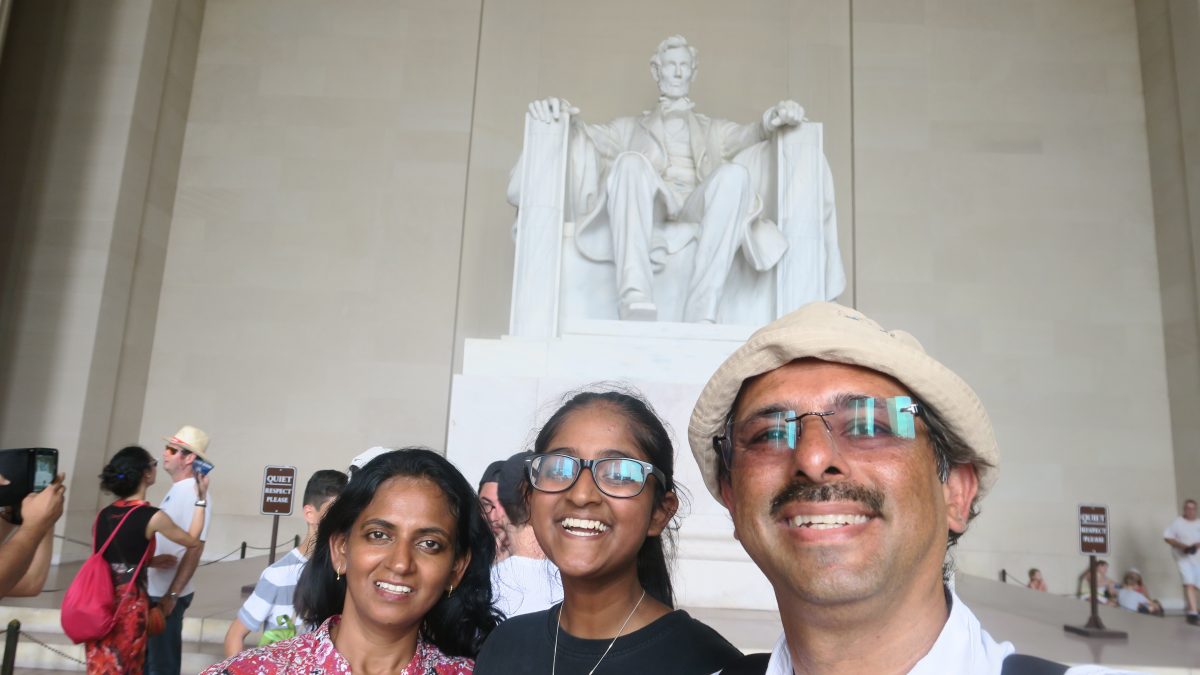 The San Jose – Washington journey involved two long South West flights -reminding us how HUGE this country is! As we left behind serenity of national parks and comforting company of Californian friends, we looked forward to Washington D.C’s contrasting offerings – museums and monuments capturing the history of USA. With Hillary and Trump battling it out in the presidential races, we cannot but feel that we are visiting the capital city at a special time.

It was interesting to note that the seeds of Washington D.C as a new city were sown due to a compromise between Northern and Southern politicians after the revolutionary war – they wanted a federal city situated BETWEEN the two power bases. Boston, Philadelphia and Baltimore were rejected by southern plantation owners as being too urban – leading to the formation of Washington D.C as a compromise formula.

The National Mall (no it’s not a shopping mall!) refers to a 2 mile long beautiful stretch anchored by Lincoln Memorial and Capitol Hill at the opposite ends, with reflecting pool, WWII memorial and Washington monument in between. It is reminiscent of the Raj Path and India Gate in Delhi.

The icing on the cake is world-class and free Smithsonian museums – each heavyweight in its own right! Visit the museums before they start charging for them!!

We started with the Museum of the American Indian which gave us a perspective on how land was systematically taken away from the natives and how young and circumstantial the existence of modern USA is, compared to organic, thousands years old civilizations of, say , India and Egypt.

Next up was Air and Space Museum with popular exhibits such as Wright Brothers’ flyer & Apollo Lunar module. Mika loved the flight simulator.

Too tired, we called it a day. The next day started with the Natural History Museum which is the most popular Smithsonian museum. To be honest, it was too MASSIVE for our feet. But we did enjoy the 3 hours that we spent here. Some snippets follow:

Next up was the National Museum of American History which gives a perspective on how this young nation was formed. However, since there are limited stories to tell, it pales in comparison to national museums of other countries.

My favorite museum, however, was the morbid Holocaust memorial museum. We got an identity card each – of an actual holocaust victim – and the museum takes us through the harrowing story past ghettos and death camps. It does make you wonder how millions got fooled by one lunatic (Are we seeing a similar story in America today ? Crazy stuff !) and how the world leaders were passive bystanders while millions were being massacred.

Every person on this planet should visit this museum or concentration camps in Germany – it has huge lessons in the modern context – unfortunately we are not learning from the past.

We kept the last day for all the memorials – FDR was my favorite but Lincoln, Martin Luther King Jr, Jefferson & Vietnam war memorials did not fail to impress either.

Thanks to college buddy Rajesh Nair, we also had a chance to travel south to Richmond (Virginia), where we had a mini college reunion with him, Sridhar & Siddhu. What fun !

We also get to taste the legendary southern barbecue at the local authentic joint.

As we drink our beers in Rajesh’s sprawling house, the situation in Istanbul (our destination in a couple of weeks) gets from bad to worse. We decide to cancel. Turkish Airlines does not pick up the phone. Nightmare. We head to their Washington office where the job is not done. Anyway, we head to the airport for our flight to Niagara falls where thankfully the Istanbul tickets get cancelled with full refund ! Thanks for reading and see you at the falls and the Cleveland convention! 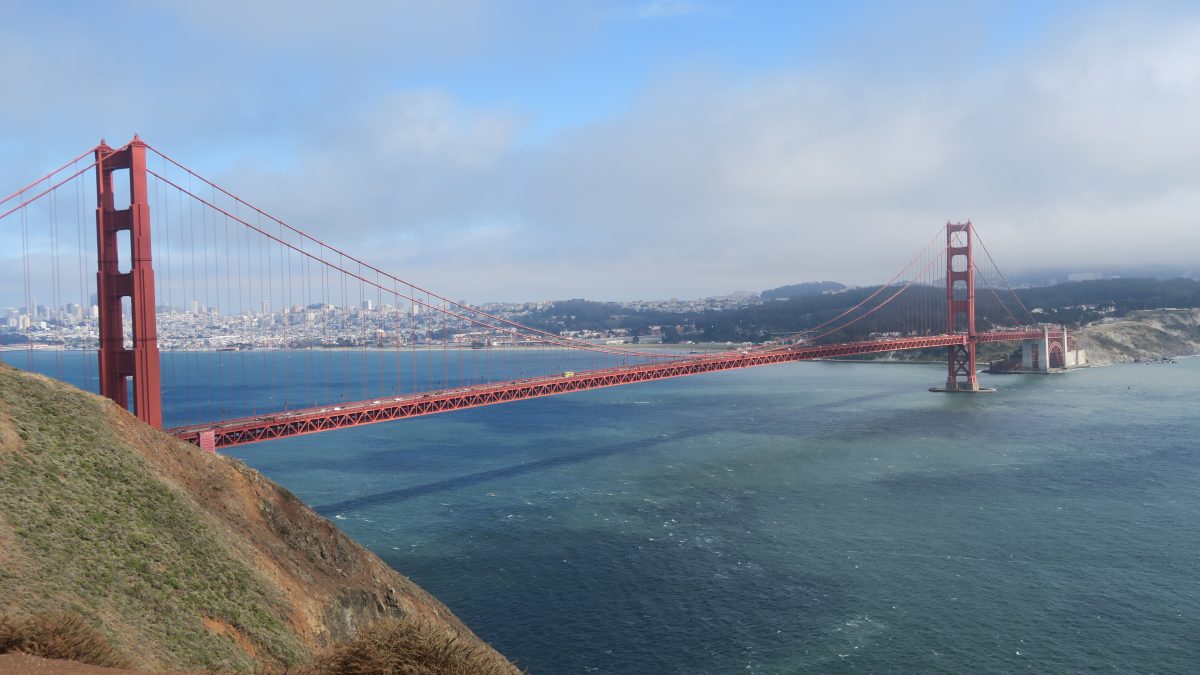 After successfully concluding our 21 day marathon American road trip, it was time for a much deserved 10 day break, at buddy Jagdeep and Vipin’s lovely abode in Saratoga, California. While jogging in lovely Californian weather, we gawked at the million-dollar villas in the neighborhood and thanked Adarsh Developers in Bangalore for giving us an equivalent Palm Meadows with its amazing clubhouse – a consolation prize for those of us who got left behind 🙂

I generally slept and did nothing most of the time while Meha bonded with Jagdeep,

And Mika did the same with Jagdeep and Vipin’s lovely children Riya and Sachi.

Kaddu’s (as I fondly call Jagdeep) gorgeous food and the existence of a lovely pool in their villa meant we felt entirely at home and for a moment forgot that we were on the road. Never become too comfortable with life!

A visit to an amazingly vast San Jose Gurudwara, followed by prayers and langar was a great testimonial to the Indians in California balancing their traditional values with their adopted country.

Looking at our sloth-like behavior and complete lack of interest in going to San Francisco, Jagdeep announced after a week that we were the worst visitors ever – staring at the dubious distinction of going back to India without a pilgrimage to Golden Gate bridge !

Arun & Sunita, another set of cool friends from Palm Meadows, saved our skin by taking us to SFO.

The blustery winds at the golden gate bridge were compensated by the awesome Bhel Puri and beer that Arun had come prepared with.

Before we left the bridge, it was time for the last snap.

Next up was the Pier 39 with its lovely sea lions, the classic Alcatraz view and a lovely carnival atmosphere.

Lombard street, with its winding roads and views, is dubbed as one of the most crooked streets in the world.

Arun uncle also helped Mika tick off one of her major bucket list items – having ice cream at one of SFO’s coolest joints !

We then went off to see Arun-Sunita’s new mansion with jaw-dropping views. Smitten by jealously, I forgot to take pictures but stuck a deal for the next holiday. We finished off the day with a lovely chinese dinner at their about-to-leave-house and bid good bye. SFO done !!

The festivities with (other) friends continued the next day with a reunion with close college buddies Jeetu and Puneet. I now believe in destiny otherwise why would God ordain a Singaporean-Puneet to be in California!

And before that we had visited Tamilian-turned-Punjabi-radically transformed (biwi ka asar hai!) – college buddy Mouli and his lovely family for barbecue.

Shamed by our sloth behavior, we reluctantly agreed to come for a Silicon-Valley trip with Jagdeep and Vipin a couple of days before departure. Boy am I thankful!

People over places. Relationships. As we leave California for Washington D.C with heavy hearts, we will cherish being with friends more than anything else. Thanks Radhika, Vipin, Jagdeep, Mouli, Jeetu, Chandra, Arun, Sunita & the rest for your crazy hospitality.

Thanks for reading. See you in D.C.